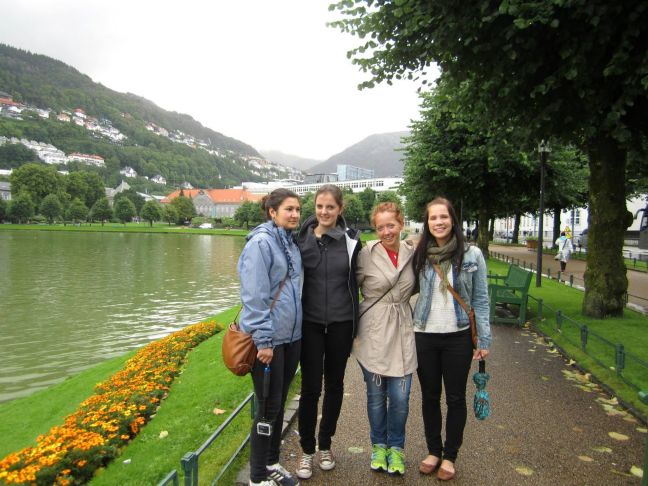 This year we are going to be four intern girls at the office, Lotta from Finland and Mirjam, Jana and Julia from Germany. We all have exchange background and some of us have been volunteering in their home countries as well. Now we share a room in the office of YFU Norway!

We arrived in Norway four weeks ago and went straight to YFUKA in Hønefoss, which was a really amazing YFU camp! We got to know a lot of volunteers, inbound students and some returnees and at the same time we had a great first week in Norway. After YFUKA we took the train to Bergen where we had an EVS-seminar for one week.

All four of us are doing the European Volunteer Service, which is a project of EU sending out people to foreign countries and working there as volunteers. The EVS program lasts for one year, so it’s almost like a new exchange year for us! In addition to the work at the office we also have our own projects that we are working with. Jana and Julia are doing a German project which goal is to raise awareness of German lifestyle and language by doing school presentations around Norway. Lotta and Mirjam are working with Coloured Glasses, which is an already existing YFU project building up cultural awareness, understanding and learning about stereotypes and discrimination. The Coloured Classes will also be travelling around Norway this year.

After the EVS-seminar we arrived in Oslo and started to learn how to do different tasks at the office. We have already learned a lot of basic things and participated in some of the events of YFU Oslo. During the year we hope to meet a lot of lovely volunteers and YFU friends in different districts while we are doing the school presentation trips around Norway!

We hope we see you soon!